This blog is a series we share on an ongoing basis From the Stable.

Meet Peter (if you aren't already lucky enough to know him)! Peter is an American amateur cyclist from Saint Paul, Minnesota. Peter currently lives in Chambéry, France where he races for AG2R Citroën U23 Team. Peter studies remotely at Bowdoin College in Brunswick, Maine.

In November of 2015 as an ambitious 14 year old, Peter sent an email asking if he could join the team for the next year, and got a yes in reply! Donkey Label then supported him for the rest of his time as a junior racer, during which he won six Junior National Track Championships in the Donkey Label kit, and earned two selections to the US Junior World Championships team, where he placed twice in the top 10. In the fall of 2020, Peter signed a contract with AG2R Citroën U23 Team, which sadly meant the end of five wonderful years racing for DL, however, we could not be more proud of Peter and his accomplishments and exciting journey ahead! We are happy to watch and follow his continued success "From the Stable" and we think you will also enjoy reading about his whirlwind travel and racing.

After a small break from racing in mid-May, I drove northeast from Chambery to the small southern German town of Singen. My route went east across Switzerland, then north from Zurich. Surprisingly, border control was non-existent, even with Covid still a major concern in Europe. I just drove across. My destination was a two-day track cycling event, the Bahnen Tournee at the Radrennbahn Singen.  Its competitors were considerably more international than at my prior track-cycling event in Italy, with riders from 21 different countries. The German national team was present, plus Olympians from Belgium and Germany, and to my surprise one other American competitor, who I’ll say more about below. The velodrome was concrete, and at just 200 meters, was small -- half the length of a standard high-school or college running track. At speeds reaching nearly 40 mph, it left my head spinning after some of the longer races!

The design theory behind velodromes is that by adding steep banking to the turns, riders can carry speed without sliding out. The larger a velodrome’s circumference, the less steep the banking has to be, since the riders turn at less sharp of an angle. Conversely, a shorter velodrome needs steeper banking. For example, the velodrome I raced on in Ascoli Piceno in May was 333 meters around, with bankings of only 20 degrees in the turns. At the much shorter 200-meter Singen velodrome, the bankings were 45 degrees. While 45 degrees may not seem like a lot, standing face to face with a 45 degree surface is almost like looking at a wall. For comparison, expert or Black Diamond downhill ski slopes start at 40 degrees.

To bike around a track that steep in the turns, you have to be going at least 20 mph, so the centripetal force can hold you to the track. Any slower, and your tires will slide down underneath you, and down you’ll go.

At these low speeds of around 20 mph, racers won’t “use” the banking to get around the turns; they’ll ride more or less perpendicular to the ground, like any normal cyclist. But the faster you ride, the more you tilt “inwards,” not perpendicular to the earth, but instead perpendicular to the surface of the banked track. At those speeds, your tires push directly into the track, whose banking pushes back. As such, velodromes are constructed to certain maximum speeds. Past that speed, say 80 km/h (or 50 mph, which I have reached while drafting a motorcycle!) on a 250 meter velodrome with a 43 degree banking, you’ll start to feel your bike pulling you up the track. Essentially you are moving too fast for the banking: your bike would prefer to go in a straight line (literally up the track toward the outside wall) rather than subject itself to the g-forces of the turn. This sensation can be unnerving. Though I never got to that point in Singen, on such a small velodrome the maximum speed is considerably lower: you often approach a gray area where you feel your bike being pulled up, but still have enough strength to push the bike back down.

My first day of racing consisted of a four-race Omnium. I placed 8th after being subjected to an impressive display of teamwork by the four German national team riders. Interestingly, teamwork is illegal in track racing: it’s supposed to be an individual sport. But it's very difficult for officials to see and penalize the proper riders. Often, by the time a rider is disqualified for teamwork, the damage has already been done and his or her teammate has already benefited from their work. The second day I raced a points race, an elimination race, and a 130 lap Madison. These races went less well, as I was out of gas after tough racing the day before.

The Madison is an unusual race. Its name comes from the place where it originated: Madison Square Garden in New York, or the one that existed between 1890 and 1925, when indoor bike racing was a major sport in the United States.  Madison riders compete in teams of two. Both teammates ride the track for the entire race, but only one at a time isracing.  Every few laps, when the racing rider passes the slowly riding “recovery” rider, the two swap who is “in” the race with a special handsling.  The slower rider reaches out with his left hand; the faster rider grabs it as he passes, and throws his teammate into the fray. Here’s a video of me doing this in 2018, and I’ll add a few more pictures down below. After a few email exchanges with the german national team coach prior to the event, I was lucky enough to race the Madison with Domenic Weinstein, a German Rio 2016 Olympian and two-time world championships silver medalist. Unfortunately we were both exhausted and weren’t able to make much of the race, but it was a cool experience nonetheless! At this event, riders were assigned pens (warmup and equipment areas) based on national affiliation, which meant that I shared with fellow American Jennifer Valente, in the midst of her prep for the Tokyo Olympics. Valente is a Rio 2016 Olympic silver medalist and is currently the #1 ranked female track cyclist in the world. Because of the lack of racing in the US, the Bahnen Tournee was her only race before the Olympics. It’s easy to forget how lucky I am to be in France where racing still happens. Though the French national schedule is far from full, when compared to the American racing situation, I can only be grateful. Although it’s a bit out of date, here’s a graph published by DirectVelo, a French cycling news website. It displays the number of days of racing per nation this year through March 31st. As the graph shows, France distinctly surpasses the other key European cycling nations, and this trend has only continued in the two months since. 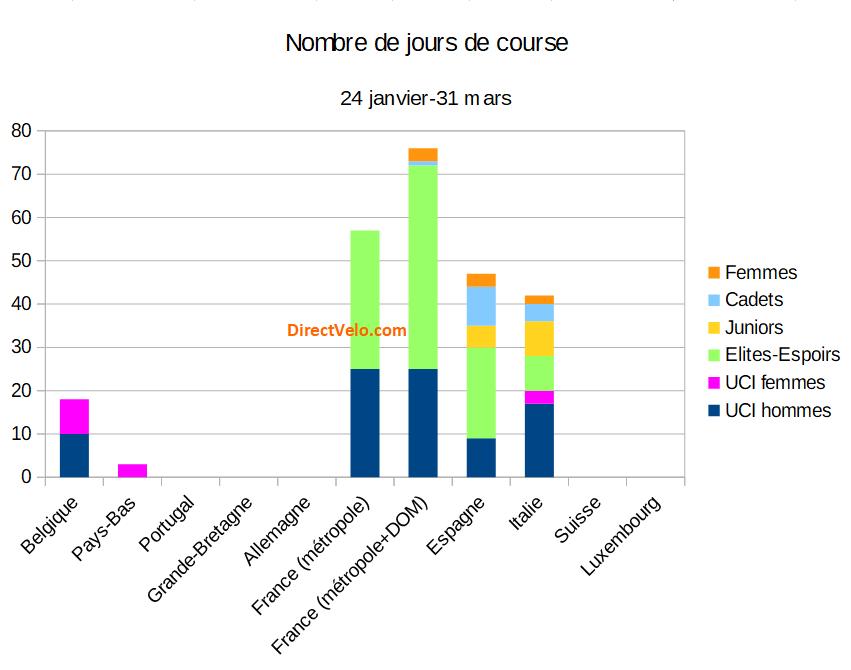 After driving back home to Chambery, I rejoined my AG2R Citroen U23 teammates and competed in two very hilly road races the next weekend. The first race was 144km, totalling 3200 meters or 10,500 feet of climbing. This means that I went nearly two milesup over the course of the race. Needless to say, the parcours (a French term for the physical layout of a race) didn’t suit my characteristics and I suffered like a dog. The second day wasn’t much different, continuing a trend of tough, hilly races, and the accumulation of fatigue over the course of the first part of my season.

After a bit of rest I’m now gearing up for the second half of my season, which will include (hopefully) more consistent road racing, and a heavy block of fourteen days of incredibly high level track racing in July. These races will fall just as many European national teams are finishing their prep for the Tokyo Olympics, so I should be confronted with some serious, but welcome competition. I look forward to catching up soon!